Jesus people, it is not pandemic, it is all about changing the world order! 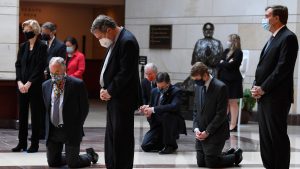 Jesus people, it is not pandemic, it is all about changing the world order!

I am frustrated as people are lagging behind. It is time to actively push back on the New World Order until it is too late. However, it is just now about questioning the agenda of Canada’s public health officials …

Watch the video, in Canada they also allowed to get this dictatorial “spoedwet” and they are going to suffer from it Big Time!

However, it is what it is and we are to be happy there is some fight against it going on, as according to https://torontosun.com:

“Dr. Theresa Tam (Canada’s Chief Public Health Officer) has a lot of ideas about how the latest social justice buzzwords apply to the pandemic and very few ideas on how to get us out of this mess we’re all in.”

In my opinion all those Chief Officers in all countries, including the head of RIVM in NL, are following the same scenario and the same globalist plot. They have betrayed their own people and hey know it. They are to be prosecuted but this is why they are also going to be so persuasive and persistent!

They know that if they do not succeed they will be judged for the crimes against humanity and the genocide against their own people! This is why they are going to do everything it takes to put us on our knees and keep it this way until … forever!

Standing on our knee will be not as much “fun” as when you are told to (WARNING – explicit content):

“Get on your knees pathetic slave“