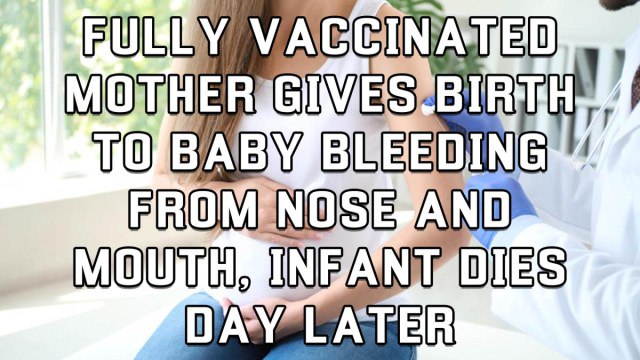 According to a Vaccine Adverse Event Reporting System (VAERS) report, a fully vaccinated mother gave birth to a baby who was bleeding from the mouth and nose. Tragically, just a day after the baby was born, the infant passed away. Following the death, the baby’s father has stated he believes that the Covid-19 vaccine is responsible for the passing.

The mother got vaccinated with two doses of the Covid-19 jab during her last trimester of pregnancy. Following the birth, the baby started bleeding from their mouth and nose, dying a day later. The report was made by a foreign “regulatory authority.”

According to the report, the mother received both doses of the Moderna vaccine on July 19th and August 13th, 2021, and the baby was born on October 6th, 2021. The child was delivered in the hospital marked with an unstable fetal heartbeat.

The report states: “The doctor said that after the patient was born, there was a cry. When the umbilical cord was cut for newborn care, the nursing staff found that the patient had symptoms of oral and nose bleeding, and immediately asked the paediatrician to intubate and give him oxygen, and he was admitted to the NICU.

“In the NICU, his result of examination showed abnormal blood coagulation, pulmonary haemorrhage, and cardiac dysfunction. Blood transfusion was given and he got an injection of Epinephrine.”

The VAERS report does not list the death as being related to the Covid-19 vaccine in any way, simply listing the death as “neonatal death.” It is not known whether an autopsy was performed and if any cause of death was documented. Regardless of this, the baby’s father reportedly applied for vaccine injury compensation as he believes the covid jab is responsible for the sudden death.

From the horse’s mouth. Thats how you keep a hoax alive.

The pandemic 2 is about to be unleashed❗️